The disagreements between coach Laurentiu Reghecampf and his ex-wife, Anamaria Prodan, continue, they accuse each other of hitting each other. The two arrived at the Snagov Police Station on Friday evening, the police investigating the circumstances in which the domestic violence took place.

The ex-spouses accuse each other of assault

The impresara claims that she was groped by her ex-husband, while the coach complained that he was slapped, he also had traces of violence on his face, according to IPJ Ilfov. The police will issue temporary protection orders for both, according to Adevărul sources.

More than a year after they announced that they were divorcing, the relationship between the two is strained. Only a day ago, Laurentiu Reghecampf was heard at the Economic Crimes Investigation Service, after Anamaria Prodan filed a criminal complaint on his behalf, accusing him of embezzling common family assets.

In December 2021, Anamaria Prodan announced that she had filed two criminal complaints with the Prosecutor’s Office attached to the Buftea Court

“Today, the undersigned Anamaria Reghecampf filed two criminal complaints with the Public Prosecutor’s Office attached to the Buftea Court, so that the competent bodies will determine who stole the property and money of the Prodan Reghecampf family and who stole and promoted in the media intimate photos of the undersigned Anamaria Prodan“, wrote Anamaria Prodan, right on her Instagram page.

Laurentiu Reghecampf and his current partner Corina Caciuc moved to Azerbaijan, since the coach signed with Neftchi Baku. The two live together with their newborn, Liam, who recently turned four months old.

The two have a new term in the divorce process on September 28, at the Buftea Court.

“I hope he comes to get a divorce because it’s already been too long since I’ve been begging him to close this circus. He’s happy, he has a new family, he has a contract abroad, we have no reason to be tied to each other”, said Anamaria Prodan, for Click!

PREV Iulius attracts the largest loan granted so far in Romania, in real estate: over 410 million euros
NEXT “I invite them to go to the brothel, if they want completion!” – PHOTO GALLERY 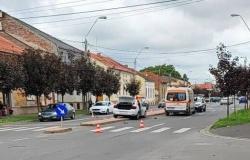